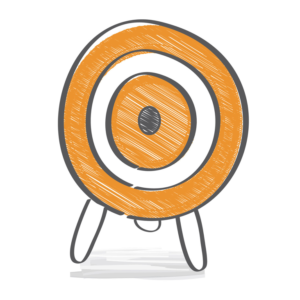 Will you join me in discussing some problems I have with the way we interpret the word failure?  Failure is a noun defined by the Merriam-Webster dictionary as:

1. omission of occurrence or performance

4. one that has failed

The term failure as used in business, sports and relationships is almost always associated with a bad happening.  When was the last time you heard something had failed and you screamed “Hooray!”?1  As the definition points out “failure” is normally a term used to describe an event, occurrence or some outcome not being achieved.  Unfortunately, the word failure often gets attached to people who are related to some failed event, occurrence or outcome, i.e. definition four above, “one that has failed”.

If we set a goal and don’t achieve it, we failed at achieving our goal. But I don’t believe that makes us a failure. Think about this.  If nobody was courageous enough to set meaningful goals and possibly fail, what would we have? Mostly nothing. Imagine a world with mostly nothing.

How do we bridge the gap between setting meaningful goals and failing to meet those goals?  Below I use a two sports analogies as examples, but the same principle applies to business and relationships.

When I was 10 years old I dreamed I’d grow up to be a right-handed hitting Rod Carew.   Carew was a great left-handed hitter for the Minnesota Twins, a Major League Baseball team.  My dream lasted until I was 12 when I realized hockey was really fun and running a football with other kids trying to tackle me was a major adrenaline rush.   Did I fail at my goal to be the next Rod Carew?   I sure never saw it that way.    I found other interests I really loved.  By 10th grade I swapped baseball for track and went on to play football and run track in college.   Admittedly, I didn’t make as much money as the next right-handed Rod Carew but I wouldn’t trade my teammates and experience in college for the Minnesota Twins or the Major Leagues.

When your team sets a goal to be the state champions, it sets all kinds of great life-long lessons in motion. Teamwork, physical conditioning, learning a playbook, developing and executing a plan, performing under pressure, love for your teammates and staff; all providing lessons to be applied to the rest of your life. If you lose in the championship game are you a failure?  You may not have achieved your goal but the really important lessons learned were the result of working to achieve your goal, not reaching the goal itself.

I believe goals are extremely important in providing direction and giving context to any endeavor we consider important. I also accept that adjusting our goals, setting new goals, and most importantly, learning from the journey toward achieving our goals, is what creates success in life.

Let me submit this for your consideration; the only personal failures in my life will be the significant regrets I have control over that I don’t rectify before I die.  Does that fit into your concept of personal failure, or have I missed something?

I appreciate your thoughts on that question.  In the mean-time I plan to write Merriam-Webster with the following suggestion:

“Please revise your 4th definition of failure to ‘one who hasn’t tried’.”

I believe that is the only characteristic of failure we can hold a person accountable for.   Set meaningful goals and enjoy the journey.

1   There are a couple examples I can think of where failure isn’t always deemed as negative.  In politics, failure has about a 50/50 chance of being viewed as good, depending on which side of the issue you are on.  In weather reporting the “failure of a ______ (hurricane, storm, winds, etc.)  to  materialize” is normally a good thing.